A downloadable game for Windows

Necropolis is a turn-based rogue-like where you must plan your turns and manage resources as you journey deeper and deeper into the Necropolis. Find the heart of the endless maze and kill the Lich that resides there.

Arrow keys: Move your character. Moving into an enemy attacks it, and moving over an item automatically picks it up (If you are able to).

Escape key: Pause the game or cancel a selection.

Z key: Pass your turn. Enemies only move when you move, so use this to your advantage.

Number keys (1-4): Use the glyph in your corresponding inventory slot.

Various weapons can be found inside the Necropolis. Use them to cut down the undead horde. Weapons have limited uses and will be destroyed when their durability reaches zero.

Swords: Higher base durability than other weapons

Daggers: Daggers have double damage while you are not spotted by any enemies

Rapiers: Walking towards an enemy while there is one space between you and them will cause you to lunge towards them. This will perform a free attack that does not use durability.

Hammers: Striking an enemy with a hammer will knock them back one space. If there is something blocking them from being knocked back the hammer will deal double damage.

Glyphs can be found throughout the Necropolis. They have single-use effects which are randomized each run. Possible glyph effects are:

Glyph of Plenty: Restores 2 health and spawns up to 6 pieces of bread throughout the current floor. Bread restores 1 health when picked up.

Glyph of Strength: Permanently increases your base power by 1.

Glyph of Weapon: Fully repairs your equipped weapon. If you do not have a weapon equipped, you will equip an Iron Sword instead.

Glyph of Lightning: Strikes all enemies with lightning and deals 2 damage to them.

Glyph of Explosion: Sends out an explosion in all four cardinal directions, which deals 5 damage to any enemies caught in it. The explosion will stop when it collides with a wall 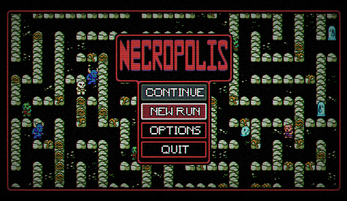 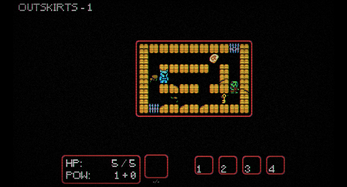 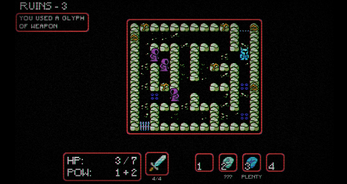 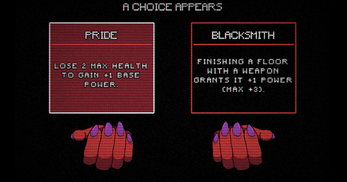